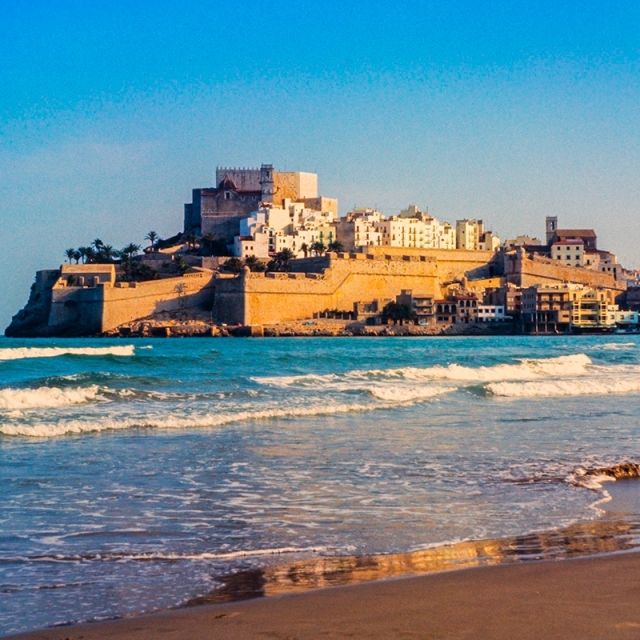 Arrival to Valencia. Transfer to the hotel.

In the morning we will go to Peñiscola, a city at the seaside of the Mediterranean. The fortress castle of Peñiscola was once the residence of the Pope Luna and was also the film set for the epic Hollywood production of “El Cid” starring Charlton Heston. In the afternoon we will have lunch in one of the many restaurants that Peñiscola has to offer. Why not try fresh fish or delicious seafood paella? After we will go to the interior of Castellon, to one of the rugged highlands of the Valencian Region known as Els Ports; our destination is Morella, a beautiful medieval fortified town high in the mountains near the Valencian-Aragonese border. The imposing walled city was built by the Templar Knights in the 13th century. We’ll see the 14th century aqueduct and Morella Castle which sits defiantly on the hill in the old Citadel. It was built by the Arabs during the Moorish occupation. Inside, we’ll see the upper ramparts, the Governor’s Palace, the old prison and the tower. This small town also has a Palaeontology Museum which is another visit option. Apart from containing many samples of local fossils, its collection includes a well-preserved, nearly intact dinosaur skeleton. Overnight accommodation in Morella.

After breakfast we go directly to Segorbe; there we will meet an expert who will guide us in the Olive Oil Museum. In this educational visit we will learn about the attributes of olive oil. On route we will pass orange orchards and discuss their distant origins, including the origin of the Valencian oranges. In the afternoon we will stop for lunch in Sagunto, a beautiful place steeped in history. Sagunto is the town that defeated Hannibal’s troops during the Punic wars and thereafter established Rome’s dominance of the Iberian Peninsula.

After we will visit the orchards in Alboraya, and stop at one of the small farms of the coastal plateau. There we learn all about horchata, the sweet, refreshing, regional vegetarian drink of Valencia. We will see how the small root plant known as the chufa (tiger nut), is turned into the delicious drink, horchata. It is grown in furrowed fields and then it is dug up, ground, separated and filtered as maceration. At the end of the day we check into our hotel in Valencia. Evening free and night’s accommodation.

After breakfast we start a full day in Valencia with a walking tour. We first visit La Lonja de la Seda (Silk Exchange), built by the city’s prosperous silk merchants (circa 1483), and a masterpiece of late-Gothic architecture and, arguably, Valencia’s best known monument.

We then walk across the street to leisurely explore the art nouveau or Modernist-style Central Market, a jewel among the markets of the world. After we walk to La Plaza de la Virgin, where the baroque Basilica de la Virgen de los Desamparados (Basilica of our Lady of the Foresaken, patron saint of Valencia), is located. The Plaza de la Virgen is renown place, on the crossroads of two major Roman thoroughfares and having witnessed a tur-bulent and dramatic history. The excavation site has since been converted into an underground archaeological museum known as La Almoina displaying artefacts of the city’s 2,000 years of history spanning 5 periods or empires — the Roman Republic, High Roman Empire, the Visigoths, the Islamic caliphate, and the Christian Kingdoms. After we will travel to discover the Turia Riverbed and pass by the verdant and landscaped river park and to learn of the River Turia’s historic bridges. The rivers’ original course was diverted in the 1950s due to a devastating flood and the old riverbed was converted into a green belt of parkland and gardens. In 1997, work commenced on the futuristic City of Arts and Sciences. Local celebrity architect, Santiago Calatrava, was commissioned to design the entire project, which has resulted in one of the most stunningly elegant, modern-day architectural accomplishments in Europe. We do a photo stop before heading south to the Albufera Natural Reserve for lunch. The Albufera is a lake separated from the sea by dunes and surrounded by rice fields. Here we will first taste authentic paella valenciana before enjoying a short boat ride to learn about the cultivation of rice. Rice has always had an important part to play in Valencian life, and for centuries has been one of the area’s major exports, as well as the mainstay of regional cuisine. We return to Valencia, evening free and night’s accommodation.

Departure to the interior counties of Valencia, Utiel-Requena, one of the most important wine producing regions where the Bobal is a supreme grape variety. Here we first visit a famous winery and enjoy a wine-tasting session. Afterwards we will continue our route to explore the original underground caves of Requena village that were used as wine cellars, followed by a delightful lunch in a very special cave. Return to Valencia, evening free and night’s accommodation.

Departure to the southern region of Alicante. First we visit Gandia and see the residence of Los Borgia one of the most influential families in the history of Valencia. Afterwards we will have some free time for a lovely lunch at the beachfront. Then we will continue to Guadalest, a small village perched upon a hill and with many tiny streets with great views over the rugged terrain. On this day the tour finishes in a village well known for its tourism, Alfaz del Pi. Hotel check in, evening free and night’s accommodation.

Departure to Alicante. Here we will have a tour of the old Lucentum baptised by the Romans, Lacent by the Arabs and finally Alicante by the Christians. It is a Mediterranean city with an imposing castle in the heart of the old town and it reflects the by gone golden years of flourishing trade routes. Free time for lunch and return to Valencia. Hotel check in, evening free and night’s accommodation.

Transfer to the airport. End of our services.

Subscribe to our newsletter and keep up with news, promotions, sales and discounts!